I received the Aura, a device advertised as a "Connected Alarm Clock". This device in itself is quite cool and uses different sounds and color patterns to help the user fall asleep and wake him up during light stages of his sleep cycles. 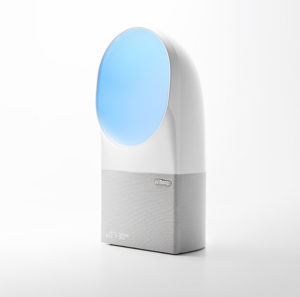 Soon I was interested in doing some reverse engineering on it because:

This article describes my journey into the Aura, from firmware image grabbing to remote buffer overflow exploitation.

The manufacturer has been contacted about the issues exposed in this article.

They already knew some of the vulnerabilities and quickly worked on fixing the others. Since March 2017, the firmware are not vulnerable to these flaws anymore.

No firmware images, complete binary files or complete scripts will be released in this article. This article serves a purely educational purpose.

I first needed to know more about the hardware of the Aura. As it's not exactly cheap, I wanted to avoid cracking the device open yet. I just had a glance at the publicly available documents from the FCC certification report available here: https://fccid.io/XNAWSD01

The (blurry) internal photos revealed the Aura was powered by a Freescale (now NXP) processor and everything you need to run an embedded Linux operating system. 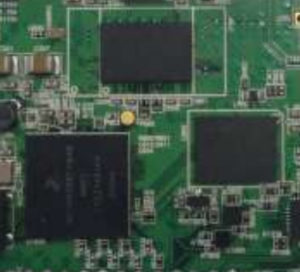 This assumption was confirmed after I ran nmap against the device who is always connected to the WiFi hotspot it has been configured for.

Port 22 appeared as filtered, but a SSH server was responding. Of course, without as valid password or SSH key, this wasn't really useful yet.

On the Bluetooth side the Aura is discoverable. A SDP server is running and let us know the following services are running.

To go further, I needed to grab the firmware of the device. As explained before, cracking it open was not an option yet.

Instead I set up a MITM configuration to sniff the communication flowing between the Aura and its servers during a firmware upgrade procedure.

It quickly appeared that what looked liked a firmware image was downloaded using HTTP.

It was not a surprised, but the downloaded Image first appeared to be something custom, with something that looked like a header at the beginning. We will further refer to this file format as a FPKG file.

Nevertheless, as always in this kind of situation using binwalk can quickly reveal where the interesting bits are.

The downloaded blob was containing a UBIFS image at offset 0x1C (probably just after what was looking like a header).

Extracting the files from the UBIFS image was rather easy thanks to the scripts from https://github.com/jrspruitt/ubi_reader

All the files from the from the embedded Linux were now accessible! The first thing I did was of course to check the content of the /etc/shadow file. I launched a the john password cracker against it, but gave up after a couple of minutes. The password was probably to complicated for this. Entering the device thanks to a simple brute force attack would have disappointing anyway.

Now that all the files were available, it was possible to understand the FPKG structure.

The functions linked to firmware updates and the FPKG files were available in the two shared libraries libfpkg.so and libufw.so. After some disassembly and guesswork, I came up with the following structure.

Applying this structure to the file I obtained before gave me:

The file was signed, so it was not possible to update my own firmware yet.

After having obtained the firmware, the next step was to obtain an SSH access. I started looking at the binaries running on the board and tried to find some vulnerabilities.

One of the daemon called seqmand caught my attention. seqmand is responsible for automatically downloading audio files from remote servers. It is working in the following way:

I redirected the HTTP requests of seqmand to my own rogue HTTP server and served custom aura_seq_list.csv files. I quickly noticed a directory traversal attack was possible.

For instance, if I used the following csv and served a test file with a valid MD5:

seqmand was doing the following:

I emulated the daemon on my laptop using a statically compiled qemu. The /test file was created.

I won't spend too much time explaining how to compile and use qemu. Others articles already did that. See for instance this.

My first plan was of course to overwrite the /etc/shadow file with my own password.

Just like before, this was working just fine when I emulated the attack on my laptop using qemu. Nevertheless, the attack was failing on the Aura. Thanks to another trick, I was able to understand why.

While browsing through the files available on the filesystem, I bumped into the /usr/bin/usb_hd_hotplug script. It's automatically launched as soon as a USB drive is plugged in one the Aura's ports.

This script does the following:

The signed script cannot be used. The flash_from_usb requires a signed FPKG image. Nevertheless, the copy_logs function just searches for a file called withings-options containing the line copy_logs=1. If this file is present on the USB drive, the script will copy log files on it.

Thanks to the logs, I realized most of the operating system was running on read-only partitions (which was not that big of a surprise). Nevertheless, some parts were still writable.

The following piece of code comes from the /etc/init.d/prepare_services script.

For instance, at runtime the content of /var/service/sshd/ is the following.

The file run is the startup script that will be executed when the service is launched while everything in the supervise/ folder can be used to interact with the process.

I decided to overwrite the /var/service/sshd/run script. Unfortunately, this was not enough. This script was only launched once at boot time and long before I can overwrite it. I needed a way to force a restart of the ssh daemon.

That's why I also used the /var/service/sshd/supervise/control named pipe. According to the man page of runsv, it is possible to kill or relauch the service by writing into it. For instance, doing

will kill and relaunch the sshd service and execute the run script again.

I then used the following csv file.

My server was serving the following run file:

And replied with a k at the first hit of the control file, and with a u at the second hit.

The attack was a success, I had a root SSH access. The (quite dirty) scripts I used are available here.

Having a SSH access allowed me to get a better understanding of how the Aura's internals were working. Further, a lot of cool binaries and scripts let me play with the peripherals of the Aura. I was able to play with the 7-segments display, to turn lights on and off, ...

To go even further, I decided to cross compile a gdbserver. I went the lazy way and built it thanks to Buildroot. The Buildroot configuration I used is available here.

For those unfamiliar with Buildroot, all you need to do is to copy my defconfig file into the configs/ folder of a freshly cloned buildroot repo, and run the following commands:

For whatever reason, the resulting gdbserver was not working perfectly. It was sometimes crashing. But it was enough to put a breakpoint and explore the memory.

Thanks to the SSH access and the gdbserver, I have been able to discover and exploit a buffer overflow vulnerability in the Bluetooth protocol of the Aura.

To understand the way smartphone App communicates with the Aura, I started by using the "Bluetooth HCI snoop log" developper feature of my Android phone. It let me sniff all the Bluetooth communication between my phone and the device.

The App is using RFCOMM on channel 9 to communicate with the device. This service is one of the two advertised by the SDP server (see the "First analysis" section).

As a first step, I tried replaying some of the packets I saw when I was playing with the clock display brightness. I sent the following payloads:

By using this small python script:

It worked as expected.

I next tried to understand the structure of the packets I sent. Helped by the disassembly of a shared library called libpairing.so and nm, the binary responsible of Bluetooth and WiFi communications, I was able to figure out the following.

Applying this structure against one of the brightness control payload we used before gives:

I didn't try to understand what was the first byte of the argument_data, but the second was obviously a value representing the brightness.

An harcoded array in the nm binary makes a link between the command IDs and the corresponding functions. Some of these commands were probably not aimed at being used by the smartphone App. The command 0x205, called cmd_perso was especially interesting.

The command cmd_perso can be used to read and write configuration data from the board. This data can for instance be:

The command can also be used to read and write Uboot environment variables. It can finally be used to reset user settings. No need to say this is a quite dangerous command. Furthermore, the parsing of this command suffers from a buffer overflow vulnerability.

To understand where the vulnerability is, let's first have a look at the argument of the cmd_perso. It has the following structure.

The action_id allows to select an action: write or read a variable, or reset the user settings. The fields are used to put the names and values of those variables.

Let's now have a look at the beginning of the function called when a cmd_perso is received.

The problem lies in the parsing of the argument of the RFCOMM packet (see the previous section for to understand the entire packet structure). The parsing is done by the function wpp_unpack_arg called at line 28.

The wpp_unpack_arg is supposed to fill a 262 bytes structure initialized by the wpp_init_perso function (line 18). It's a very generic function who takes as argument a pointer to a more specific function able to parse the payload of a cmd_perso packet: wpp_unpack_perso (line 23).

The wpp_unpack_perso calls the memcpy function multiple times and fills the 262 bytes long structure without boundaries checking. The fields of the cmd_perso packet argument are copied into it. A buffer overflow can occur, it is possible to overwrite the saved fp and lr registers saved on the stack.

To exploit this buffer overflow, I choose to use well known ROP techniques. I encountered two main difficulties:

Because of these two points, it was not possible to build a long and complex ROP chain. That's the reason why I decided to build the exploit in the following way:

To build the first chain, I used the following gadget:

To let the execution of the program resume normally, I added a

at the very end of the chain end to pop a valid fp and pc from the stack.

Considering the limited length of buffer and the necessity of stopping the chain just before a valid fp and pc, I successfully built a chain able to write three bytes at a time. Using this payload multiple times was enough to write an arbitrary shell command to a known address.

The chain aimed at calling system() was easier to build. I just used the following gadget and took care of calculating the right value for fp.

The following demo shows the result once everything is put together

From the firmware obtained thanks to the cleartext HTTP traffic, it has been possible to root the Aura and detect two vulnerabilities.

The first of them was possible to exploit thanks to MITM. I exploited it to get a SSH root access and run my own code.

The other was more serious. An attacker could possibly exploit it to run his own code on the device using a Bluetooth RFCOMM link.

As explained before, all these flaws are currently fixed.